Technical Analysis on Gold and Silver

Price pushed higher for the second day in a row with on a negative retracement in the greenback. XAU/USD upside bias eyes $1900 level as US dollar slips on broad-based weakness. Gold continues to show some resilience after a rebound from the level at $1847 level. 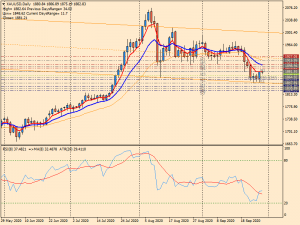 As observed on the daily chart, following the corrective move higher XAU/USD confronts instant resistance at the $1900 level. Bulls will then look to takeout the next hurdle at $1927 upside level. To the downside, significant support holds out at the $1847 level which may likely limit the anticipated pullbacks.

Further down, a bunch of minor support levels will slow the declines before the yellow metal reaches the critical cushion at $1765 level. The RSI is turning higher at the moment which means the trigger line has made a higher low. That said, traders might still wait for some follow-through buying on the break of $1900 upwards.

On the 4-hour time frame, sustained strength beyond the $1875-81 resistance zone might trigger some short-covering move. However, the positive move might still be seen as an opportunity to initiate fresh bearish positions. This, in turn, might cap the upside near the $1900 level strong barrier breakpoint.

In the meantime, the exchange rate could likely gain support at $1864 level  If the given support holds, the rate could maintain its consolidation in the short term. Although the bulls are likely to have some luck in their attempt, as the short-term moving averages have charted a bullish crossover.

Silver (XAG/USD) buyers are once again in near-term control, as the price rebound from $22.46 level in the prior session while set to attempt the $24.00 mark. The white metal heads towards the rising moving average 5 at $23.80 level. The bears take a breather after the recent slump, mainly driven by the relentless strength in the US dollar.

The daily Relative Strength Index (RSI) looks north, towards its midlines of 50, allowing for further upside. Also, the moving average 5 is beneath the moving average 13 from above, about to yield a bullish crossover and adding credence to the recent rebound from the $22.46 support level.

Alternatively, selling pressure could intensify below the aforesaid moving average 5, with the rising trendline support at $21.64 on sellers’ radar. A breach of the latter would validate a rising channel breakdown, prompting the resumption of the recent sell-off.

From a short-term technical perspective, the white metal is attempting a minor recovery after meeting strong demand at $21.64 level, the falling trendline support while the spot wavers in a potential falling channel formation.

To the upside, the bulls look to reclaim the critical near term horizontal resistance currently at $24.06 level for the recovery to gain momentum. The 4 hours Relative Strength Index (RSI) has rebounded from within the oversold territory at 20 and points higher towards the oversold AT 80, adding credence to the pullback.